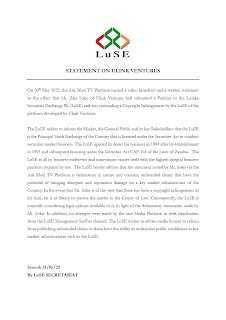 STATEMENT ON ULINK VENTURES
On 30th May 2022, the Ask Nuvi TV Platform carried a video broadcast and a written statement
to the effect that Mr. Zike Soko of Ulink Ventures had submitted a Petition to the Lusaka
Securities Eschange Pic (LuSE) and was contending a Copyright Infringement by the LuSE of the
platform developed by link Ventures.
The LuSE wishes to inform the Market, the General Public and its kev Stakeholders that the LuSE
is the Principal Stock Exchange of the Country that is licensed under the Securities Act to conduct
securities market business. The LuSE opened its doors for business in 1994 after its establishment
in 1993 and subsequent licensing under the Securities Act CAP 354 of the Laws of Zambia. The
uSE in all its business endeavors and innovations carries itself with the highest integral business
practices required by law. The LuSE hereby advises that the statement issued by Mr. Soko via the
Ask Muvi TV Platform is defamatorv in nature and contains unfounded claims that have the
potential of bringing disrepute and reputation damage on a key market infrastructure of the
Country. In the event that Mr. Soko is of the view that there has been a copyright infringement of
his firm, he is at liberty to pursue the matter in the Courts of Law. Consequently, the LuSE is
currently considering legal options available to it, in light of the defamatory statements made by
Mr. Soko. In addition, no attempts were made by the said Media Platform to seek clarification
from the LuSE Management Staff as claimed. The LuSE wishes to advise media houses to refrain
from publishing unfounded claims as these have the ability to undermine public confidence in key
market infrastructures such as the LuSE.
Issued: 31/05/22
By LuSE SECRETARIAT
Tags
Breaking News Business Featured General News Headlines Politics Top Stories Trending Stories
Related Article