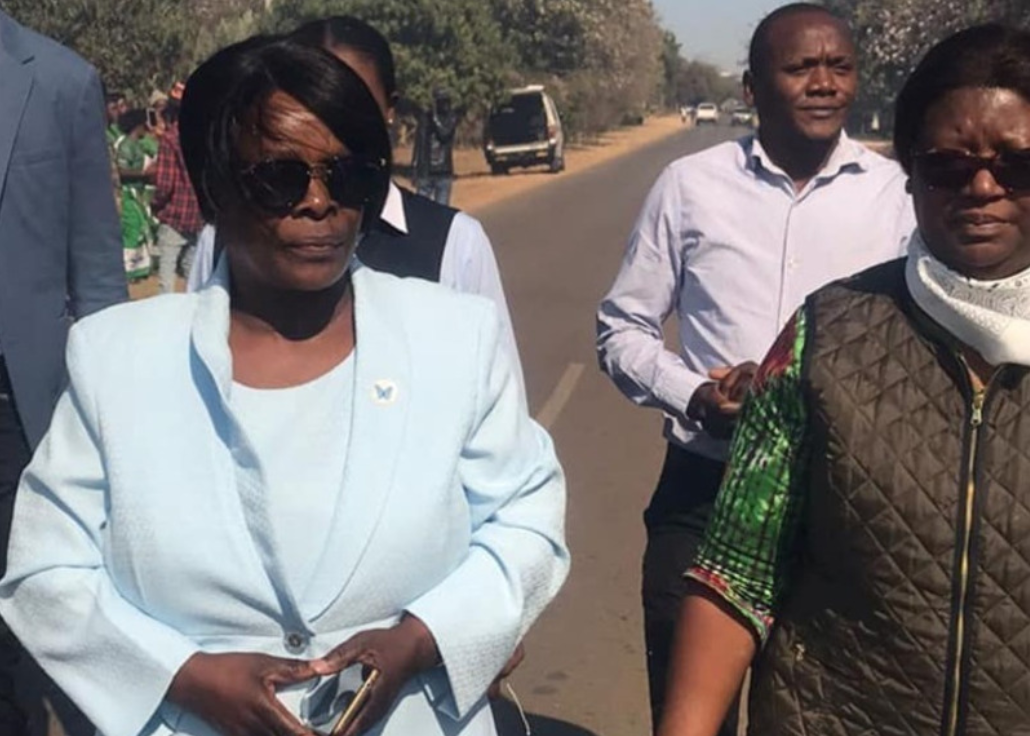 Despite the warning by the Inspector General of Police Lemmy Kajoba to people planning to meet at Drug Enforcement Commission (DEC) to offer solidarity to former first lady Esther Lungu who has been summoned to appear before the commission, Patriotic Front (PF) Members of the Central Committee (MCC) have showed up at the DEC HQ in a quest to offer support to the former first lady.

PF Deputy for Information and Publicity Amb. Emmanuel Mwamba noted that the directive given by the Police IG is illegal and against the constitution of Zambia as people have freedom of association, assembly and can express themselves.

“So, when orders are illegal, you ignore them and that’s what we have done,” he said

Amb. Mwamba has since appealed to the Police IG to be professional and respect fundamental rights of people and ensure that he moves away from what Zambians condemned which is Police brutality, abuse of state institutions and the Police to operating professionally.

“They have not allowed us in, I have tried three entrances but to no avail and I introduced myself but they have still stopped me like am harmful or carrying any weapons, so why are they stopping me?” he stated

He noted that when Hon. Kampyongo former Home Affairs Minister and the former Police IG Kaganja offered a similar directive to President Hichilema, he didn’t listen, neither did he obey the orders and instructions.

“President Hichilema boasts that he has brought freedom of expression and freedom of assembly, so he wants to repeat what he used to condemn or does he what to apply vengeance because for me this is a very simple matter as I have the right to association,” he said

Amb. Mwamba cited that the huge mobilisation of the Police, closure of the road is a huge expense and big inconvenience to people, as it has even caused a traffic jam.

He stated that the Police have probably spent more money in the huge mobilization than the value of the flats they are investigating.

He added that seeing the declarations by ordinary Members of Parliament who have assets worth 35 million of Kwacha, it’s no doubt that a woman of caliber like the former first lady whose been married to a very successful lawyer for many years, a Minister for 5 years and a President for 7 years could fail to build 15 flats.

“Ordinary people even you journalists have flats, so what about a former first lady,” he said

Amb. Mwamba holds that what is happening is mere persecution of the first family, the DEC and other law enforcement agencies have not found any case warranting even this process, this is therefore a huge witch hunt to divert the country from what is cardinal to attend to the issue of economy in the country, cost of living, and lack of employment.

“They still haven’t bought fertilizer and this is July, the PF would deliver fertilizer by May, this is government is still struggling to procure fertilizer,” he said

And Charity Kapona a Member of Central Committee (MCC) noted with concern as to when offering solidarity became a crime in Zambia because as MCCs we have the right to follow and support the former first lady so as for her to see that she has fellow women who are daughters and sisters and care for her.

“President Hichilema himself said he will give people the freedom of speech, that’s why we are here and not harmful we just want to support our mother, for this is a woman who has been the wife of the President for many years,” she said

“We have told our youths not to come in numbers and stay where they are,” she said

She cited that such a move is very discouraging to women to take part in politics because being a woman in politics will make people call you all sorts of names, as women are usually insulted, disrespected, intimidated and victimized, which is not supposed to be the case because women are needed to speak out.