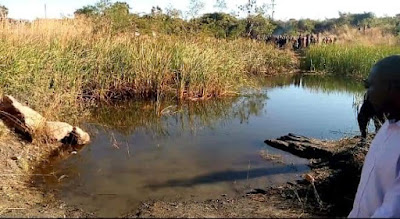 FOUR pupils of Nanga High School in Mazabuka district of Southern province have drowned after they failed to swim while doing some training in an old gravel pit filled with water.

The Four who where among other cadets met their fate yesterday between the hours of 16:00 hours and 17:00 hours.

Zambia Police deputy Spokesperson Danny Mwale says the cadet who was in-charge of the training and four others are currently in custody in connection with others who died.

"The deceased pupils have been identified as Lewis Sindembi aged 16, Ezila Mweemba aged 14, Vincent Simfukwe aged 16 all Grade 10 pupils and a Grade 12 pupil identified as Peter Chibabe aged 18. The Incident occurred on June 11, 2022 between 16:00 hours and 17:00 hours near Nanga High School in Nega Nega area of Mazabuka District," he said.

He said the four deceased were among other Nanga High School Cadets who were doing some training in an old gravel pit filled with water when they failed to swim.

"Police and Fire Brigade Officers rushed to the scene and managed to retrieve the body of Lewis Sindembi around 20:00 hours while the Three other bodies have been retrieved today around 06:00 hours.All the bodies have been deposited in Mazabuka General Hospital Mortuary awaiting postmortem,"he said.

Mr Mwale added that the Cadet who was In-Charge of the training and Four others are currently held in Police custody.

Meanwhile, a 41 year old man identified as Leonard Chanda drowned while he was fishing in the Kafue river.